MenAreGood
MenAreGood is a channel for men, boys, fathers, new fathers, grandfathers and women who want to learn about men and masculinity.  Are you tired of the false narrative of toxic masculinity?  Did you know there is a huge amount of research that shows the positive aspects of men, boys and fathers?  That is what we focus on here, being a source of good information and also a place to connect.   Join us!
Interested? Want to learn more about the community?

tgolden@tgolden
May 24, 2022
Gender Studies - if Taught by a Realist

This was sent to me by an anonymous donor. See what you think....

We would basically teach college kids that women are the cart and men are the horse. It would be glorious. We would teach them that women are hypergamous and men are hypogamous. Imagine a professor up in front of the auditorium saying, "Alright! So you meet a guy, and he doesn't have a nice car! So do you want to date him? No! You don't! Why not? Because! Women are hypergamous! Write that down. It will be on the test!".

Then, he would say, "Men! Expect to be sexually rejected at a rate ten times higher than the average woman! Is this unfair? Yes! Life's unfair! And yes! You have good reason to resent women for this! But you have to just suck it up and take it with a smile! Okay?".

Then he would say, "Ladies! You won't buy men for sex. Not even for five cents! Why not? Because! The male body is worth zero dollars to you as a sexual commodity! In fact, it's worth less than zero dollars in that you expect men to pay you!"

And then he would say, "Hypothetical situation! You're courting for marriage . . . And the man has no job! What do you do? You dump him! Why? Because that's how women are!".

And then he would say, "Moving on now, to false rape allegations! Okay! Do women make them? Yes! They do! And more often than they want to admit! Now, let's talk about The gender empathy gap! It's very real! If you cry, as a man, people will call you a poor sport! A sore loser! You lost, Jack! Get over it! Better luck next time! No use crying over spilt milk! As for the women? Crying helps them to get ahead!"

He would then go on to say, "Ladies! Men will always love your bodies more than your minds and definitely more than anything you have to say! Don't even try to deny this! Men love women, not for what they have to say, but in spite of what they have to say! Get used to it! You could all stop talking, entirely, forever, and men wouldn't even mind! In fact, it would probably be better for everyone!".

And then he would move on to religion. . . "God is a man! Why isn't God a woman? Because! When we make God a woman, it goes to women's heads, and they become evil manipulative cunts! So we basically had to demoralize women by telling them God is male, just to bring their pathological narcissism down to barely tolerable! And even this didn't work very well, but it was a slight improvement, so we stuck with it for a long time! If you think women are a pain now, wait until they believe God is a woman!".

Then he moves on to abortion . . . "Abortion! Is it murder? Yes! Why do we allow women to do it? Because men care more about sex than men care about ethics! So men will basically let women crucify children in hope of getting laid. And if you're chasing hippy chicks, then that's your shtick if you are trying to avoid offending them in hope of earning mating rights!"

If only we could take over gender studies and rewrite the entire program.

What else would the prof say? Leave a comment. 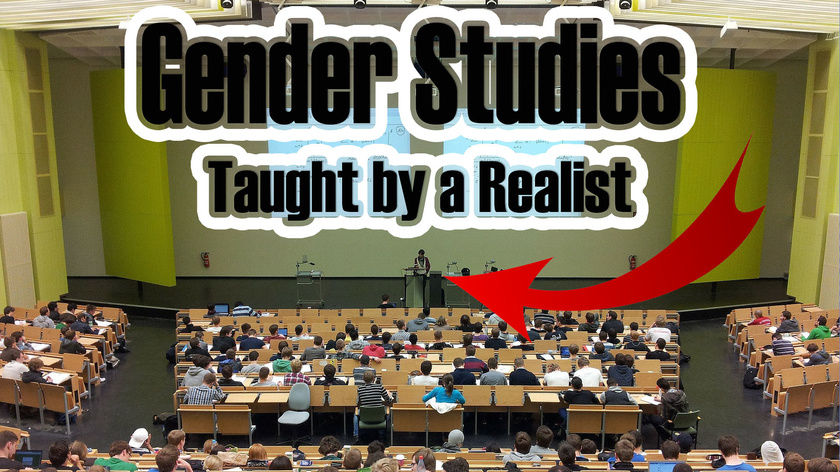 Paul and Tom discuss the #3 killer of relationships: MONEY.

Sorry, the previous attempt to put this post up failed to add the video. Hopefully this one will work.

Tom offers 10 things that are important for anyone to know about Parental Alienation. Whether you are a parent, a friend, or a professional, these will help.

This video has a look at a zany feminist brigade who are pushing for 50% female workers in construction in Australia. Lots of wonderful claims and not much proof. Crazy stuff.

I realized that there was no explanation for the woman's comment about making dinner on the toilet. What I think she is referring to is that the breast feeding rooms give women a place to "express" their milk and avoid the only other place on most work sites as being the porta-john. I wonder if female employees have that taken out of their check? lol

This is a short excerpt from Helping Mothers be Closer to their Sons. The book was meant for single mothers who really don't know much about boy's nature. They also don't have a man in the house who can stand up for the boy and his unique nature. It tries to give them some ideas about how boys and girls are different. This excerpt is about play behaviors.

tgolden@tgolden
September 27, 2022
Once a victim always a victim?

Are you joking??? Will be curious what you all think of this....

0
View All
0
Reply
See More
Sign Up To MenAreGood
Sign Up for free to see more from this community or subscribe to MenAreGood for $5/month to support tgolden for more interaction and exclusive content.
Login Signup
Available Now

Men have been unfairly villainized and blamed for our societal problems. This leaves our men, and sadly our boys confused and falsely accused. At the same time a great deal of research has been done on boys, fathers and men but it largely stays hidden since it is ignored by the media. The default is to see men as bad and any mention of their goodness is ignored or even attacked. These things have limited positive discussion around issues of men, boys, fathers, and masculinity. MenAreGood is a place where you can voice your view without fear of being cancelled. Join us!

11
View All
0
Reply
Don’t have a Locals account yet? SIGN UP
I’m already a member Log in
Please keep this window open while your file is uploading...